Once considered 'The City of Kings', Lima is having something of a renaissance. It can be a tricky city to appreciate, but this sprawling and chaotic metropolis has some of the South America's best museums and internationally recognised restaurants; if your international flights leave you some time here, there is plenty to do.
Lima was founded in 1535 by Francisco Pizarro, the Spanish conquistador who masterminded the conquest of the Incas after defeating Inca Atahualpa. The city is a fascinating mix of old and new, and there are lots of things to see and do.

The Plaza de Armas is a central historical hub, with the Presidential palace and many colonial era buildings here and the San Franciso catacombs nearby.

Lima - Things to do

Heading south on the sun route along the Pacific Coast you reach the Ballestas Islands. These are an ideal location for day trips to islands rich in marine life. A little further down the coast there are more luxury beach retreats in nearby Paracas.

Lima - Where to stay


The two main areas to stay in Lima are Miraflores and Barranco. Miraflores has many modern, high-rise international hotels with ample restaurants nearby. Alternatively, the bohemian neighbourhood of Barranco is up and coming, and slightly quieter. Hotel B is our favourite option.


Lima is a fantastic city with first class world renowned restuarants and excellent museums - an attraction in itself. It can be a tricky city to fully appreciate, but as most international flights land in Lima, it is worth knowing what's out there. It often depends on what time you land as to whether you should sample the best of the city or choose to base yourself at the airport hotel before catching an onwards internal flight.


While in Lima, eat cerviche! Ceviche is a zesty and refreshing marinaded seafood that comes in many different styles.  If you like seafood you must try the ceviche here, it is amongst the best in the world.

Our favourite areas of Peru

The Sacred Valley of the Incas 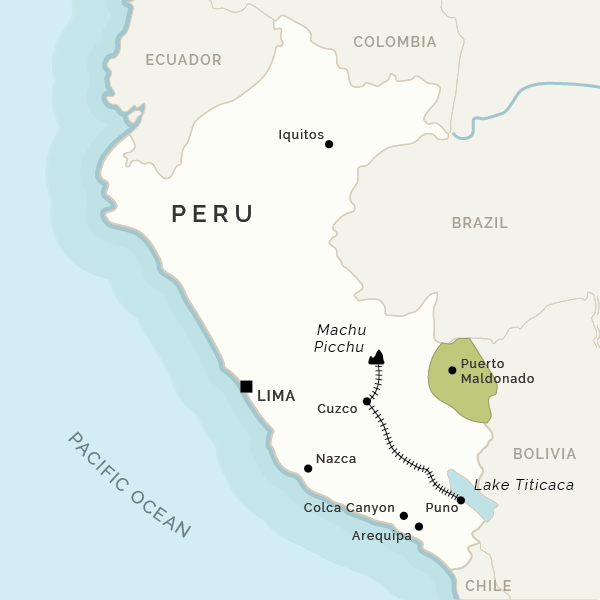